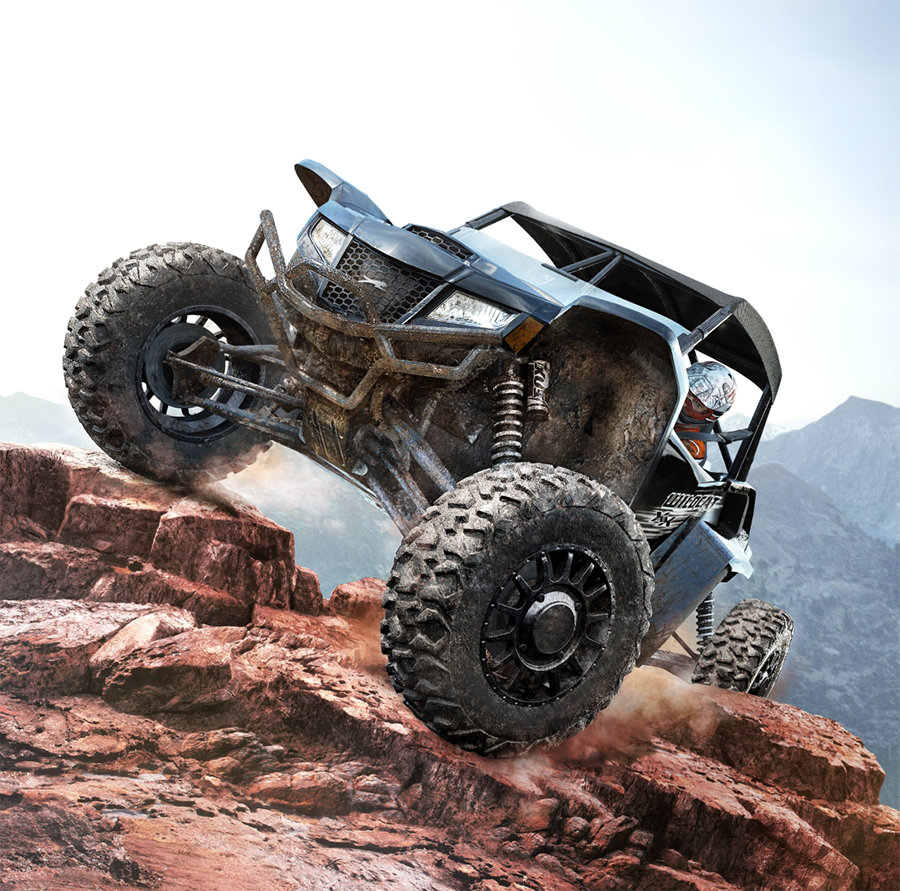 Most racing games have you zipping around tracks, frantically trying to get in front of your rivals before reaching the chequered flag. Overpass does things a little bit differently, requiring patience and accuracy over pure speed. The outcome? It poses a significant challenge that can rapidly become irritating.
Overpass is an off-road racer in which the environment provides the biggest challenge. Racing against the clock you have to make it through challenging courses filled with natural and man-made obstacles that are spread out over varying terrain. There’s a steep learning curve to master before you start challenging the top riders, mainly due to the game’s realistic physics and challenging courses. Going over hidden bumps can see your rider face planting the mud or cause your vehicle to capsize. Both of which mean you to lose momentum, and in Overpass momentum is key. It can be the difference between success and failure. Losing it is costly, very costly, often bringing your progress through a course to a gear grinding halt. Unfortunately, it seems in Overpass that you spend most of your time either stuck or trying to ascend a particularly difficult hillside. The slightest mistake is punished harshly, entering obstacles on slightly the wrong angle often results in you becoming stuck, yet again. Whilst exiting them, in a way the game deems as incorrect, results in a 10 second time penalty. On two occasions in the same race I was awarded a penalty! One for exiting a log bridge on a slight angle which was classed as skipping the entire obstacle? It was by centimetres! The second occurred on a see-saw ramp that I exited as it hit the ground, with the game judging that as a jump off, despite that fact I had come to a complete stop. The game is strict, perhaps unnecessarily so and it really started to get on my nerves.
Unlike in traditional racing games, putting pedal to the metal isn’t the best way to achieve success. Precision and caution often yield better results. In fact, going fast in Overpass can often bring a negative outcome. Your off-road buggy or ATV can easily become damaged on the many hazards that are often concealed by shrubs or mud. Once damaged your vehicle becomes even harder to handle. Good handling and precise control on the often tight and bumpy tracks are essential. As I touched on previously, physics have been implemented very well in Overpass. Providing quite an accurate approximation of real-world handling, and when operating an ATV, you can even shift the weight of your rider around to counteract the terrains attempts to throw your vehicle off balance. But despite this they only serve to add to the overall difficultly of Overpass, as playing with a game pad or keyboard doesn’t provide the feedback necessary to fully counteract its effects.
Overpass includes all the features one would expect to find in a racing game. Races are split into two types, circuit and obstacle. Circuit races, see you going around a set course over a set number of laps, whilst obstacle courses tend to be more open, allowing you to take different routes to the chequered flag. Certain obstacles have to be completed and are marked with red flags to signify their importance. Obviously, picking the right route for you is essential, and choosing wrongly will eat valuable seconds away. Multiplayer play is supported locally in addition to the expected online race mode. Whilst, the career option allows you to create a rider, earn reputation and prize money. This allows you to unlock upgrades, new vehicles and equipment. There’s not a great variety on offer to unlock and the games whole progression system lacks any real depth.
Getting irritated seems to be something of a theme in Overpass, and I often found myself feeling more than a little frustrated. Being bogged down in pools of mud watching my wheels hopelessly spin isn’t really my idea of fun!  Don’t even get me started on mud covered hillsides, these pose a formidable challenge for your vehicle to get over! Often swallowing up vast amounts of time as you struggle to guide your vehicle up and over. A particularly steep muddy hillside made me throw in the towel on more than one occasion. On my initial try, a mistake stripped me of any momentum and I simply couldn’t find a way up. Numerous restarts later I was still unable to find a way up! In the end I simply gave up. The level of difficulty in Overpass really does try your patience and makes prolonged play a rather frustrating and unrewarding affair.
Overpass, with its real-world physics and challenging courses put it beyond the realm of most racing fans. This is hardcore off-roading at its most hardcore. Maybe it should come with some kind of warning? "Warning this game can be extremely irritating!" It’s definitely not for casual off-road racing fans!